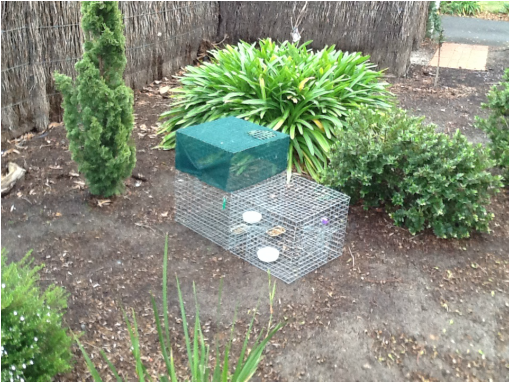 1.     Place the trap in a relatively open area or where birds already feed, or areas they overlook from vantage points (e.g. power lines, trees etc.)

2.     It’s best to locate the cage off the ground preferably on an old table or chair or something similar. In the open but near to trees or vegetation ( as above). The Mynas will take some time to get used to the structure being there (they are very smart and wary birds). When they find the food source is regular they will come.

3.     Place the trap where there is minimal people or animal traffic (e.g. behind a shed or carport). Under power-lines can be good as they often perch on telegraph poles and lines where they have good access and views.

4.     Location is important - so if you are not successful in catching Indian Mynas in one location, it might be worth trying a different one. The trap may need to be secured with pegs depending on location within your garden. 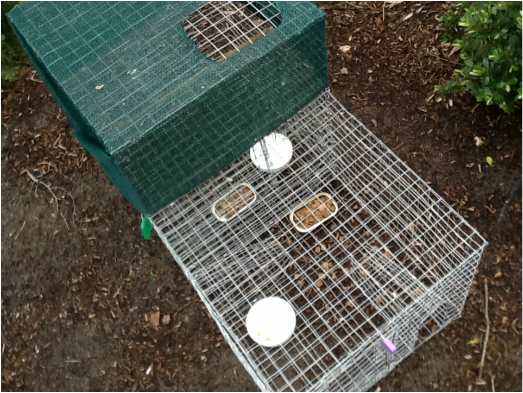 1.     It’s best to bait the trap and remove trapped birds last thing at night (to catch early feeders) and so the birds do not associate the trap with danger. Mynas eat all day and stop just before dusk, when they return to their communal roosting tree.

2.     The trap can be baited with any food the Indian Mynas are accustomed to feeding on. Some trappers recommend dried white bread. Others swear by dried cat food as it is simple to use, the right size, and has plenty of red bits (e.g. Friskies or Whiskas dry cat food), which the Indian Mynas are attracted to first. Other foods can be used (pet animal pellets or leftover foods). Try a variety until you are successful.

3.     DO NOT USE meat as it will smell and attract rats. DO NOT USE chook food, grain or seeds of any sort, as this will attract native birds and non-target species (such as crested pigeons and parrots). Some birds eat only seed and others may eat nectar, but Mynas will eat anything. That’s why the bird's spread and displacement of other species has been so successful.

4.     It is recommended that food is placed on a white plate. Other coloured plates are acceptable but it has been suggested white plates may help the birds to see the food. Failing that, you may use the inside cap of a large jar or any receptacle likely to enhance the food offered.

5.     For the first few days put a small amount of loose feed outside the funnel entrances to attract Mynas to the trap area. Also place food in the tunnel, and inside the feeding chamber where the Mynas can see the food directly in front of them when they are in the tunnel. Do not overfeed the birds outside the trap!

6.     A large tub of water nearby will also attract Mynas as they like to bathe and drink.

7.     Place clean fresh water and food in the trapping chamber – the idea being the trapped birds will be happy and will call other birds to the area.

8.     Do not attend to the trap in daylight if possible, as the birds will become wary. Mynas are communal creatures and soon teach each other about food sources.

9.     Removing birds, baiting trap etc. should be done after dusk or at night so the birds don’t associate the trap with danger. If crows and/or magpies are attracted to the trap site, funnels can be placed over the entrance to the trapping chamber to prevent them taking any free food in the walk-ins or in the feeding chamber. They are too big to fit through the walk-ins and get into the trap.

To ensure that we maintain the continued support of supporting vets, the Bayside Council and the general community it is essential that trappers act responsibly and ethically with regard to the trapping and delivery of birds to participating vets.

1.  It is BIMAG’s policy that all its members and its operations conform with the Animal Welfare Act 1992 and advice from the RSPCA. Details can be obtained from the appropriate websites.

2.   It is of paramount importance to minimise stress to birds that you trap, so please ensure there is sufficient food and water available at all times for the number of birds in the trap.

3.  Keep pet cats and dogs away from the cage as they will harass the trapped birds, and dissuade new birds entering the trap.

4.  Do not be disappointed if you don’t catch birds every day. They are spasmodic in their movements, so be persistent. If you keep feeding they will return.

5.  It can be useful to keep a call bird or a pair, in the containment chamber of your trap, or in a bird cage placed near the trap, as this may encourage others to the trap. Place a plastic bread twist around one leg to identify each bird. When other Mynas are removed you can identify and keep the original pair to lure others.

6.  Avoid stressing the trapped bird(s). It is recommended that captive call birds be very well looked after with food and water and not be left in the trap for longer than 48 hours.

7.   Check the trap regularly—each day in fact. While this trap has been specifically designed to catch Indian Mynas (ANU), occasionally non-target species are caught. If a Blackbird or thrush becomes caught then simply open the release door of the trapping chamber and it will fly out. Do not throw birds in the air – let them find their own way out, or extract them using a glove and blanket and place them on the ground. If Mynas are in the trap as well then you will have to remove the bird (with gloved hand) without letting the Mynas fly off when you open the door.

8.   When checking the trap, you may take the birds out of the trap using a gloved hand, or by encouraging them into a pillow case, sack ( or portable box or cage ) placed adjacent to the trapping container’s release door.
Recording Birds Trapped

1.     Each time you trap a bird(s) and deliver same to the vets or to a BIMAG collector please complete your record form so that records of trapped birds can be consolidated for the trial survey results. This will enable accurate assessment of bird numbers and culling volume, together with dispersion and density in the city and nearby areas.

2.     These survey forms will be collected during the trial by BIMAG. This contributes to a successful trail outcome and continuation of the program.

3.     On occasions you will also be asked to provide, by email, number of birds caught.

4.     If you are not catching birds, or wish to cease inclusion in the trial you should contact one of the name below to arrange for the return of your trap (so someone else can use it).

5.     Upon successful conclusion of the trial funded by BCC, it is likely that the community action group will seek to become incorporated to continue its valuable work.